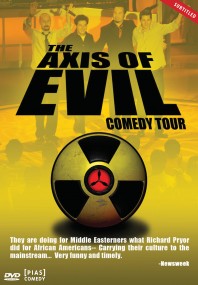 In a time when East and West do not seem to understand each other, top stand-up comics of Middle Eastern descent Ahmed Ahmed, Aron Kader and Maz Jobrani take it upon themselves to single-handedly bridge the gap with an original comedy tour that has become one of the hottest concert tickets in the country.

Special guest Dean Obeidallah, who’s appeared on “Saturday Night Live”, “Late Night with Conan O’Brien” and is a founder of the New York Arab-American Comedy Festival, joins the “Axis of Evil” creators for this sold-out, no-holds-barred event that has made headlines everywhere from CNN to Newsweek.

Nothing is off-limits. Whether it’s gay terrorists or the difficulty of flying in post 9/11 America, The Axis of Evil Comedy Tour blasts stereotypes with outrageous humor.