Aaron “Karo” – The Rest Is History 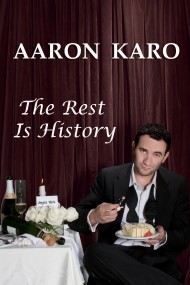 Aaron Karo hates when bridesmaids conclude their speeches about how the bride and groom met with the tired phrase “and the rest is history.” His set – which premiered as a one-hour Comedy Central special – kicks off with this complaint and then runs the gamut from drunken friends who always start fights, to couples who take pictures of their feet while on vacation, to the singles table at weddings being filled with people in relationships. In this follow-up to his acclaimed album “Just Go Talk To Her,” the comedian and author who shot to fame with his viral “Ruminations” email column unleashes a series of side-splitting anecdotes about being thirty and unattached that keep the Boston crowd roaring with delight. Karo ends the album – which includes more than twenty minutes unseen on Comedy Central – by revisiting those pesky bridesmaids in a deft and hilarious finale.