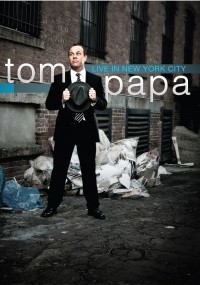 With a shiny happy exterior and an off-beat, demented interior Tom Papas latest comedy release attacks our hilarious attempts at happiness as life piles up around us. In his second comedy album family is a recurring theme whether it is on a global scale as we connect through MyFace to his married life in a house full of girls to old men with muscles who look like chicken cutlets. This is a truly funny exploration of life from a comedian who is living it with his eyes wide open.